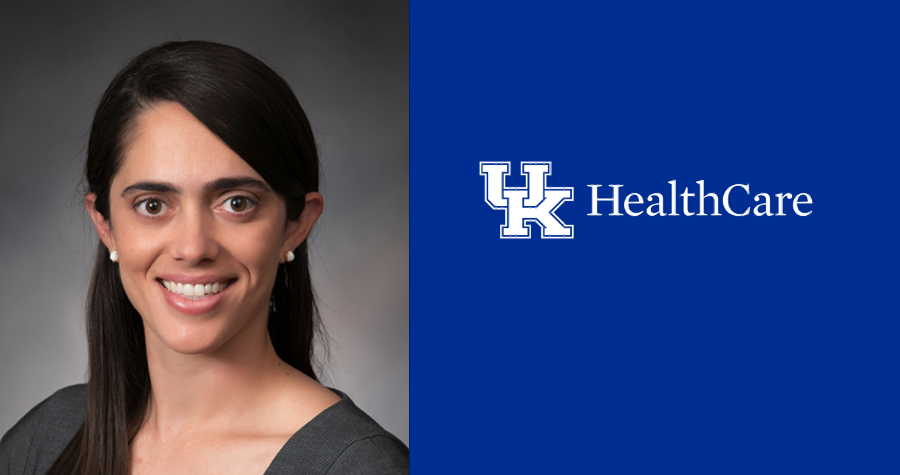 UK HealthCast is a podcast series featuring interviews with UK HealthCare experts on a variety of health-related topics, from how to recognize stroke symptoms to what patients need to know about clinical trials and more.

This week’s HealthCast features Caitlin Fiorillo, MD. Dr. Fiorillo is a pediatric otolaryngologist at UK HealthCare who works with children from birth to 18 years of age.

We spoke with Dr. Fiorillo about the causes and symptoms of “tongue tie” in children as well treatment options from our cutting-edge team at the Pediatric ENT program, including Dr. Fiorillo, Dr. Christopher Azbell, Dr. Kenneth Iverson and Allison Comick, APRN, MPH.

Listen to the full podcast at the bottom of the page.

What does it mean for a child to be diagnosed with a tongue tie?

Tongue ties are just another name —  in the medical field we call it ankyloglossia — and it basically refers to the tongue being limited in its movement. The limited movement can be caused by a tight lingual frenulum. The lingual frenulum is a band of tissue that connects the underside of the tongue to the floor of the mouth.

Unfortunately, there's no good standard definition of what a tongue tie is, and there is a wide range of opinions to diagnose them and to treat them. Your child may be diagnosed with this by a physician, a lactation consultant or a speech therapist. Being told that your child has a tongue tie doesn't necessarily mean that they need further treatment, and I really only recommend treatment if it's causing issues specifically with feeding or speech.

It's almost exclusively developed at birth. Everyone is born with a lingual frenulum, so it's completely normal to have that band – and they come in all different shapes and sizes, just like babies do.

Do we know what specifically causes tongue ties?

We really don't. It's just how your baby's developed. There could be rare cases where someone gets a scar band under there from prior surgery or trauma, but really most of the tongue ties that we're talking about are things our babies are born with.

What are some symptoms to look out for?

I have patients that have extremely tight frenulums that I'm seeing for completely other reasons, and they really have no issues at all. Then, I'll also see other children who have a very mild tongue tie, but are having significant problems with it.

In infants, the most notable issue is with breastfeeding, because babies require a good latch to express milk from their mother. A poor latch can be seen with feeding with kids that have tongue ties. Breastfeeding in general can be a very frustrating and trying time for mom and baby. And especially, if they have a tongue tie, that's making things even harder.

How exactly will mom know if their child might have a tongue tie? Does it manifest as pain? Are there other symptoms that she should be aware of?

Moms can have problems with pain when they breastfeed. They can experience a poor latch from their baby. They can have frequent detachment. Sometimes, you'll hear this clicking sound that they'll make when they're feeding or they'll take in a lot of air, which can lead to gas and reflux. Those are the main symptoms to look out for.

What problems can occur with older children?

Older children tend to have issues with speech, and it's really uncommon that they will have them, but I do see it. It does not cause speech delay. And it's not a reason that a child is not talking. So, if that's the case, then we need to look at something else, but it can contribute to articulation errors or how they say certain sounds like the ‘L,’ ‘S’ sounds, which require a little bit more mobility of the tongue.

For older children, for the speech issues, I think it's really important to have them evaluated by a speech pathologist prior to considering treatment of the tongue tie. Many of those sounds I mentioned before that children can have issues with like ‘L’ or ‘S’ sounds can be a normal part of a child's language development.

For example, a child may say ‘wag’ or ‘yag’ instead of ‘leg’ up until five years old, or they may say ‘ting’ instead of ‘thing.’ That can also persist up to five years old. So, I rely heavily on a speech pathologist to perform a really good evaluation of the child's speech before I consider treating a tongue tie.

What happens if this goes undiagnosed?

In general, there aren’t a lot of issue with it going undiagnosed. Infants are going to have trouble with breastfeeding and once they get out of the breastfeeding phase, it does not cause any issues with taking solid foods or the growth or development of their mouth.

I think the biggest issue you can see is in older children and even teenagers – they can have some issues moving their tongue and some social embarrassment with the restricted tongue mobility.

So, they can have difficulties like licking their lips or sweeping food from their teeth, which can affect the health of their teeth. They can have difficulties licking things like ice cream cones, which can be embarrassing when they're surrounded by their friends and peers. But in general, I think the biggest issue comes in the infant period, when they're trying to breastfeed.

The first step if you think your child has a tongue tie is to talk with your pediatrician about your concerns, whether you think it's causing feeding issues, speech issues, or even if you just look at your child's tongue and feel that it's not moving as well as it should.

I think the pediatrician is the best go-to person for an initial evaluation to get you started on the best route for diagnosis and treatment. Treatment really depends on what issue the tongue tie is causing.

If your child's not having any issues, but there's a tongue tie present, really no intervention or treatment is needed. If your infant is struggling to breastfeed, or mom is having a lot of pain with breastfeeding, then I think referral to either a lactation consultant or to someone like myself is the best next step.

Lactation consultants can help mothers with other issues for breastfeeding, such as proper positioning on the breast, correcting the position of the infant lips when they're feeding. An ENT such as myself can evaluate the child, determine if a frenulectomy or dividing the lingual frenulum is the best next step.

I do a full exam and history of what's going on, what the issues are, and discuss the process with parents about what's involved with a lingual frenulectomy.

In infants less than six months old, I'll perform the lingual frenulectomy in the clinic. This process only takes a few minutes. It does not require any sedation or anesthesia, and it can actually be really rewarding to have an infant and mother who are having trouble with breastfeeding, and after this procedure, it can just kind of change the whole family's life. The procedure itself takes about five minutes. I have the mothers breastfeed immediately after and often moms will notice a difference immediately. Other times, moms do need to continue working with a lactation specialist, but overall, the procedure's very low risk, but should be done only when it's indicated.

What about older children?

I think getting evaluated for a tongue tie is extremely important. In children that are in the two- to five-year-old range that do have articulation errors that are struggling with their speech, I think those are kids that should be evaluated. There are lots of other reasons that they can have issues, but there certainly could be a tongue tie as well contributing to things.

In those older children, the frenulectomy does have to be done in the operating room. For it to be done safely does require a general anesthesia, but it's still a very short procedure and the recovery is short and there are minimal complications. So, it's definitely an option for kids that really need it.

Anything else we should know?

Well, I'm biased, but I think we have an amazing team that can take care of any child. Myself and my two partners, Dr. Azbell and Dr. Iverson, have undergone additional training that is specific in the care of children with ENT issues, including tongue ties. Like I said before, I think an appropriate evaluation of a child is the crucial first step.

I'm the mother of two boys, and I know what it's like to struggle with breastfeeding an infant. You would think that it's the most natural thing in the world, but it's (often) really not. Even without a child with a tongue tie, it can be very frustrating feeling like you're not providing for your infant. But every situation is different. Every baby's unique. At UK Pediatric ENT, we want to help you make the best possible decision for you and your child.

A dad himself, Dr. Ken Iverson wants all kids to breathe, hear better