Olivier Thibault, a researcher in UK’s Department of Pharmacology and Nutritional Science, along with researchers from four other institutions, is using a grant from the National Institutes of Health (NIH) for a collaborative project using non-invasive treatments on mice to measure early predictors of Alzheimer’s disease in hopes of finding a cure.

Alzheimer’s disease wreaks emotional havoc on patients who are robbed of their memories, their dignity and their lives. It’s financially devastating as well: care for Alzheimer’s patients is predicted to top $1 trillion by the time children born today are having children of their own.

Alzheimer’s begins its destruction decades before there are outward signs of memory loss, so some recent scientific effort has focused on recognizing the earliest signs that portend disease onset. Those telltale signs, called biomarkers, would enable patients to receive treatment for Alzheimer’s sooner, thereby delaying the disease’s devastating progress or stopping it altogether.

The biomarker treasure hunt has been difficult thus far. There’s been little to no progress toward finding one that is a “triple threat” – non-invasive, inexpensive and easily translatable to community populations. So, the NIH called for research proposals to find new ways to diagnose Alzheimer’s disease and predict its progression.

Among the grant applicants was a group of scientists from four different institutions, each with a specific scientific skillset that when put together had the resources to test the presence and reliability of one such biomarker.

“When I first saw the call for applications, I was really excited,” Thibault said. “I remembered some interesting work that came out of Bruce Berkowitz’s lab at Wayne State University and thought it might be the cornerstone of a project that met the grant’s parameters.”

That cornerstone is called Quest MRI, a dynamic process that is able to pinpoint levels of oxidative stress in specific regions of the brain over time, and in living subjects. The technique is non-invasive and usually doesn’t require expensive modifications to existing equipment.

“Almost everyone with a television set has heard about the benefits of antioxidant-rich vitamins like A, C and E, and superfoods like blueberries, green tea and dark chocolate,” Thibault said. “Well, antioxidants are the body’s defense against something called free radicals. Free radicals are natural byproducts of chemical processes in the body, and in a healthy state free radical production is offset by the work of antioxidants. But when there are too many free radicals, the balance is disrupted, and the resulting oxidative stress can increase the risk for diseases like AD.”

People write off the times when they can’t remember where they left their keys, but realizing they don’t know how to get home from the grocery store is a wake-up call that something is terribly wrong. The scientific term is “spatial disorientation,” and it’s a critical hallmark of Alzheimer’s disease.

The capacity for spatial orientation lies in a part of the brain called the hippocampus. Berkowitz and Thibault hypothesized that using Quest MRI to measure oxidative stress in the hippocampus of a live animal and compare it to that animal’s ability to remember how to navigate a maze could be proof of the existence of a biomarker for Alzheimer’s. Even better – the process uses inexpensive drugs that are already FDA-approved – making Quest MRI easily translatable to the general population.

The NIH was impressed, and awarded the foursome $2.8 million over five years to test the hypothesis.

How the collaboration works

Rounding out the project are Geoffry Murphy at the University of Michigan and Brian Bennett at Queen’s University in Canada. Bennett has developed a mouse genetically predisposed to high levels of oxidative stress, and Murphy’s mice are already afflicted with Alzheimer’s disease.

Thus begins a roughly 850-mile circuit of testing where Bennett’s oxidative stress mice are flown from Ontario to Ann Arbor, Mich., where Murphy puts them and his own Alzheimer’s mice through a maze to assess spatial navigation. Murphy himself then drives the mice to Detroit, where Berkowitz uses his Quest MRI to determine free radical production in the hippocampus. Ultimately, the mice end up in Thibault’s lab, which uses calcium imaging techniques to measure how neurons are affected over time, thereby measuring the relationship between free radical production, oxidative stress and behavioral changes in the same animal. Some of the mice actually make more than one circuit to assess cognitive and corresponding biochemical changes over time.

Even better, says Thibault, the group foresees a bonus aspect of their research: they will also be able to test the efficacy of pharmacologic and non-pharmacologic methods to reduce free radical production in the hippocampus. Advantageous data would point to the possibility of reducing free radical production using either an antioxidant “cocktail” or a light therapy called photobiomodulation.

Either option, Thibault said, would be “the cherry on the cake.”

The mice don’t begin their journey until later this month, but Thibault and his colleagues are energized at the prospect of joining the hunt for a cure for Alzheimer’s disease.

“To be able to identify or even predict Alzheimer’s disease using Quest MRI, and then also be able to intervene using antioxidants or photobiomodulation, would be a one-two winning punch,” Thibault said. 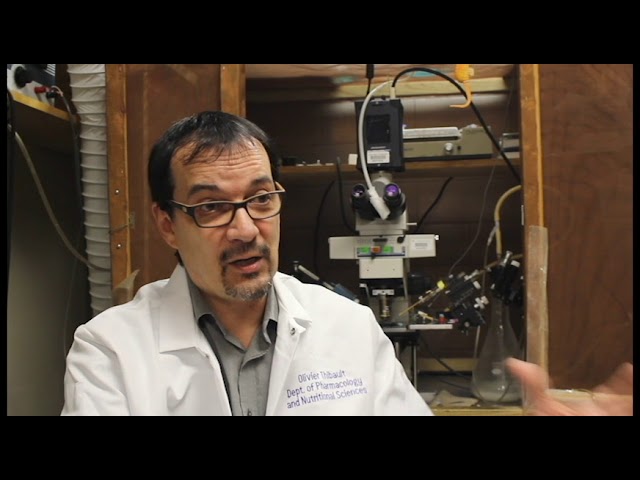