Although there is no cure at this time, medicine in some cases may slow memory loss for a while. Other medicines may help with sleep, depression, or behavior changes.

Alzheimer’s disease is different for everyone. Some people can function well for a long time. In the early stage of the disease, you can do things at home to make life easier and safer. You also can keep doing your hobbies and other activities. Many people find comfort in planning now for their future needs.

How It Affects You

Areas of the brain affected by Alzheimer's and other dementias 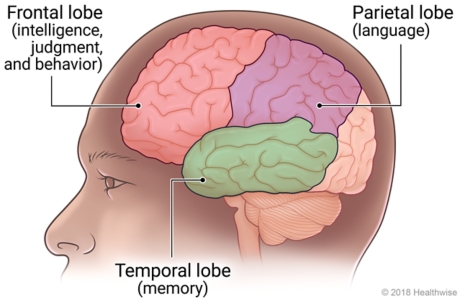 Alzheimer's disease is a condition that destroys the connections between cells in the brain over time. Eventually these cells die. This affects how the brain works. As cells die, the brain shrinks.

Alzheimer's is the most common form of mental decline, or dementia, in older adults.

What are the symptoms of Alzheimer's disease?

Memory loss is usually the first sign of Alzheimer's disease. Often the person who has a memory problem doesn't notice it, but family and friends do.

Having some short-term memory loss in your 60s and 70s is common, but this doesn't mean it's Alzheimer's disease.

Following are some of the symptoms of mild, moderate, and severe Alzheimer's disease. Symptoms vary as the disease progresses. Talk to your doctor if a friend or family member has any of the signs.

These symptoms often are more obvious when the person is in a new and unfamiliar place or situation.

Other conditions with similar symptoms

Early in the disease, Alzheimer's usually doesn't affect a person's fine motor skills (such as the ability to button or unbutton clothes or use utensils) or sense of touch. So a person who has motor symptoms (such as weakness or shaking hands) or sensory symptoms (such as numbness) probably has a condition other than Alzheimer's disease. Conditions such as Parkinson's disease, for instance, may cause motor symptoms along with dementia.

Other conditions with symptoms similar to those of Alzheimer's disease may include:

Can Alzheimer's disease be prevented?

At this time, there is no known way to prevent Alzheimer's disease. But there are things that may make it less likely.

Adults who are physically active may be less likely than adults who aren't active to get this disease or another type of dementia. Moderate activity is safe for most people. But it's always a good idea to talk to your doctor before you start an exercise program.

Older adults who stay mentally active may be at lower risk for this disease. Activities that may help include reading, playing cards and other games, and working crossword puzzles. Going out and staying as socially active as possible may also help lower the risk. Although this "use it or lose it" approach hasn't been proven, no harm can come from often putting the brain to work.

How is Alzheimer's disease diagnosed?

Your doctor will do a number of tests to make sure your symptoms are caused by Alzheimer's disease and not another condition.

Your doctor will ask about your past health and do a physical exam. The doctor may ask you to do some simple things that test your memory and other mental skills. Your doctor may also check how well you can do daily tasks.

The exam usually includes blood tests to look for another cause of your problems. You may have tests such as CT scans and MRI scans, which look at your brain. By themselves, these tests can't show for sure whether you have Alzheimer's.

It usually is helpful to bring a family member or someone else you trust to the appointment. A family member may be able to provide the best information about how your day-to-day functioning, memory, and personality have changed.

How is Alzheimer's disease treated?

There isn't a cure yet for Alzheimer's disease. But there are things that can be done to maintain quality of life.

The doctor, family, and the loved one can work together to make a care plan. Care plans may include any of the following:

Helping a person with Alzheimer's disease: When to call

Call 911 anytime you think you may need emergency care. For example, call if:

Call your doctor now or seek immediate medical care if:

Watch closely for changes in your loved one's health, and be sure to contact the doctor if:

How can you care for your loved one who has Alzheimer's disease?

How can you care for yourself when you have Alzheimer's disease?

Taking care of yourself

Copyrighted material adapted with permission from Healthwise, Incorporated. This information does not replace the advice of a doctor.