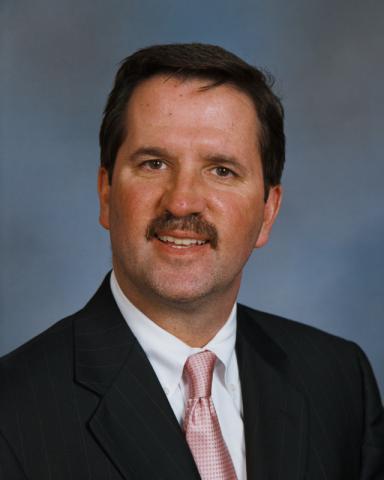 Darren Johnson, MD, is a nationally recognized physician in the field of sports medicine, particularly in complex knee surgery, and has spent the past 25 years caring for orthopaedic patients at UK HealthCare.

He joined the UK faculty in 1993 and served as the chair of UK Orthopaedic Surgery & Sports Medicine from 2000 to 2018. In addition to his role as a professor, Johnson is also the head orthopaedic surgeon of UK Athletics.

The prevention and treatment of ACL injuries in athletes is one of Johnson’s primary interests. He also enjoys teaching other surgeons, so he travels to national and international meetings as an invited guest speaker on knee injuries.

Johnson has served on the board of directors of the American Academy of Orthopaedic Surgeons and the American Orthopaedic Society for Sports Medicine, and he was the former president of Southern Orthopedic Association.

He has published more than 100 peer reviewed manuscripts as well as more than 30 book chapters and has edited two textbooks: Clinical Sports Medicine and Reconstructive Knee Surgery.

His outside interests include outdoor activities, particularly fly fishing, hunting, skiing and golf. He also enjoys spending time with his wife, Nancy, and their three children.

In sports medicine we see a lot of high school and college kids who have an injury, and for the patient, it's like the end of the world. What’s going through their mind is, "I'll never be able to get back on the field.” We see them at their lowest point, we operate on them and go through the rehab process. When that player goes back on the field and back to doing what they love to do, you can't beat it. This is not a job to me. This is my calling.

University of California at Los Angeles School of Medicine