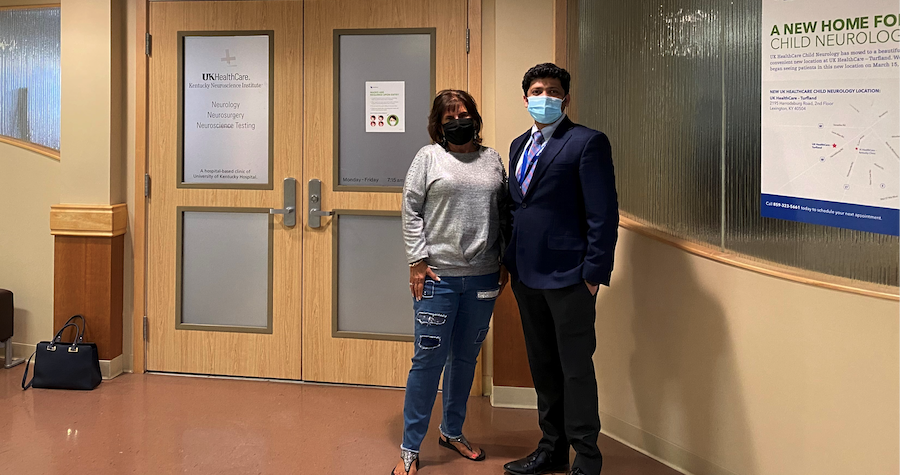 After being diagnosed with breast cancer, Judy King, a lifelong Kentuckian who lives in Brodhead, underwent a bilateral mastectomy and chemotherapy in 2014.

But then she started to suspect that something else was wrong: She had developed an extreme sensitivity to light.

“I knew I was always a sunglass wearer, but boy, I could tell that I wanted sunglasses every minute that I was outdoors,” the retired accountant said.

That was only the beginning, though. King subsequently started to notice that the sides of her mouth would randomly twitch and that her eyes would close for two to three seconds before opening again.

Driving safely soon became an issue. King couldn’t risk getting on the road if her eyes were to shut for too long, especially if she were anxious or tired, which is when these issues worsened.

“I didn't really know what it was,” she said. “I didn't know what was going on.”

King, now 67, wasn’t the only one who noticed these symptoms.

Members of her church – including her primary care physician, Dr. Karen Saylor of Rockcastle Family Wellness – were starting to worry, too. What was wrong? Could it be Parkinson’s?

“These symptoms were significantly bothering her daily activities and made it difficult to enjoy her vacations and social life,” Guduru said.

After years of symptoms but no diagnosis, King finally had an answer in June 2018: Meige syndrome. That was the first time she had ever heard of this condition.

Meige syndrome is a rare neurological movement disorder characterized by involuntary and often forceful contractions of the jaw and tongue muscles as well as involuntary spasms and contractions of the muscles around the eyes. The forceful blinking can be triggered by bright lights, fatigue, emotional tension, and environmental factors such as wind or air pollution. Some individuals with Meige syndrome may also experience clenching or grinding of the teeth, displacement of the jaw, grimacing, chin thrusting, or repeated pursing of the lips.

Guduru was able to diagnose King by studying her health history and conducting a physical examination. No other testing was necessary.

“Dr. Saylor has practiced 30-plus years, and I'm only the second patient she had that had this condition,” King said.

What causes Meige syndrome is currently unknown. What doctors do know is that it affects women more often than men and occurs in about one in every 20,000 people.

“Diagnosis is very often delayed because of failure to recognize and evaluation by a movement disorders specialist,” Guduru said.

King started her treatment the month following her diagnosis. She now receives botulinum toxin (Botox) injections around her eyes and mouth every three months. The injections have to be repeated this often because the Botox wears off during this time period.

Deep brain stimulation surgery is also another treatment option for Meige syndrome patients, but Botox has proven to be the most beneficial route for King.

“[Botox] helps to relax the muscle groups in the face and neck region and helps with spontaneous muscle spasms,” Guduru said. “It also helps to resolve frequent eye blinking and will be able to keep her eyes open without difficulty.”

Guduru uses electromyography (EMG) to guide an accurate dose of the Botox injections to the right muscle and location each time.

“It's helped a whole lot, and it's not painful,” King said. “I’m able to tell within a couple of days that I'm already better.”