UK HealthCare is excited to welcome Dr. Mark F. Newman as its new executive vice president for health affairs. He is responsible for UK HealthCare, the clinical enterprise of the University of Kentucky, and also oversees the UK College of Medicine in conjunction with the provost.

Newman joins UK from Duke University Medical Center, where he had a distinguished career in medicine, specializing in anesthesiology, as well as in healthcare management.

In joining UK, Newman is returning to his home state of Kentucky. He is an Owensboro native and grew up on his family’s farm in Ohio County. He earned his undergraduate degree in biology from Western Kentucky University in Bowling Green and went on to attend the University of Louisville College of Medicine on an Air Force Health Professions Scholarship. He earned a medical degree in 1985 and went on to residency training in anesthesiology at the U.S. Air Force’s Wilford Hall Ambulatory Medical Center in San Antonio, Texas. He followed that with a fellowship in cardiothoracic anesthesiology and transesophageal echocardiography at Duke University Medical Center. 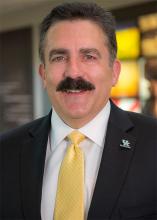 After completing his medical education, Dr. Newman returned to active duty in the Air Force and was deployed in Operations Desert Shield, Just Cause and Desert Storm. He also practiced anesthesiology at the University of Texas Health Sciences Center in San Antonio.

Later, at Duke, Dr. Newman served as chief of cardiothoracic anesthesiology, chair of anesthesiology, and chairman of the board and then-president of the Duke Private Diagnostic Clinic – Duke’s physician practice organization. He was named the Merel H. Harmel Distinguished Professor of Anesthesiology in 2005 and currently holds research grants of more than $10.5 million.

Newman is a prolific author of medical publications, chapters, editorials and books. He is a 2010 Alumni Fellow of the UofL School of Medicine and received the 2012 Duke Medical Alumni Association Distinguished Faculty Award.

He takes the helm at UK HealthCare during a period of rapid growth and expansion. UK HealthCare and the UK College of Medicine make up the Commonwealth’s largest academic medical center, offering advanced subspecialty care to the people of the state and the region and creating outreach programs throughout the state with the aim of giving people access to high-quality care close to where they live.

Newman and his wife, Susan, have three adult children.