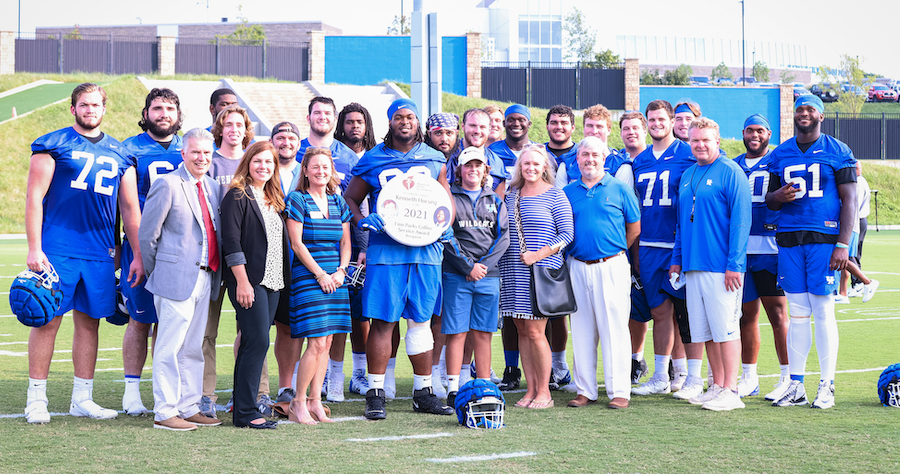 The American Heart Association has awarded Kenneth Horsey, an offensive lineman for the University of Kentucky football team, the Finn Collier Service Award in recognition of his work to support its lifesaving mission – to be a relentless force for a world of longer, healthier lives.

Horsey, who had open heart surgery in 2018, shared his story on numerous occasions last year to raise awareness and donations for the American Heart Association, including at the Central Kentucky Heart Walk. He also organized a Hands-Only CPR training for UK’s football team and staff, exponentially increasing the number of people educated about the importance of the lifesaving skill. Horsey dedicated his 2020 football season to Finn Collier, for whom the award is named.

“If we can spread awareness and teach just the basics of heart health, I feel like I’ve done my job. I am committed to the goals of spreading awareness and saving lives,” Horsey said.

“Hands-Only CPR is a skill that can double or triple the chance of survival during cardiac arrest, and it takes just 90 seconds to learn,” Stone said. “When I met Kenneth, he recognized that the people he is around the most would not know what to do if he or another teammate suffered cardiac arrest. So, that’s where we started – teaching the UK football team Hands-Only CPR.”

“Kenneth recognized the value and wanted this to be a community movement to teach Hands-Only CPR. Kenneth’s story is incredible, and he is using that story to improve his community.”

“We are thrilled that Kenneth received the Finn Collier Service Award, and we are grateful to the Central Kentucky American Heart Association for memorializing Finn in this way,” said Finn’s parents, John and Tricia Collier. “Finn loved spreading awareness and raising funds for research, and we feel Kenneth is carrying on Finn’s commitment.”

More than 350,000 out-of-hospital cardiac arrests occur each year in the United States. Immediate CPR can double or triple a person’s chance of survival. Unfortunately, bystanders only perform CPR 46 percent of the time because they are not confident in their ability. With Hands-Only CPR, it takes just two steps to save a life: 1. Call 911. 2. Push hard and fast in the center of the chest. To learn more, visit heart.org/cpr.

In honor of World Chocolate Day, here are some recipes to help you celebrate (responsibly)

10 things every woman should know about her heart