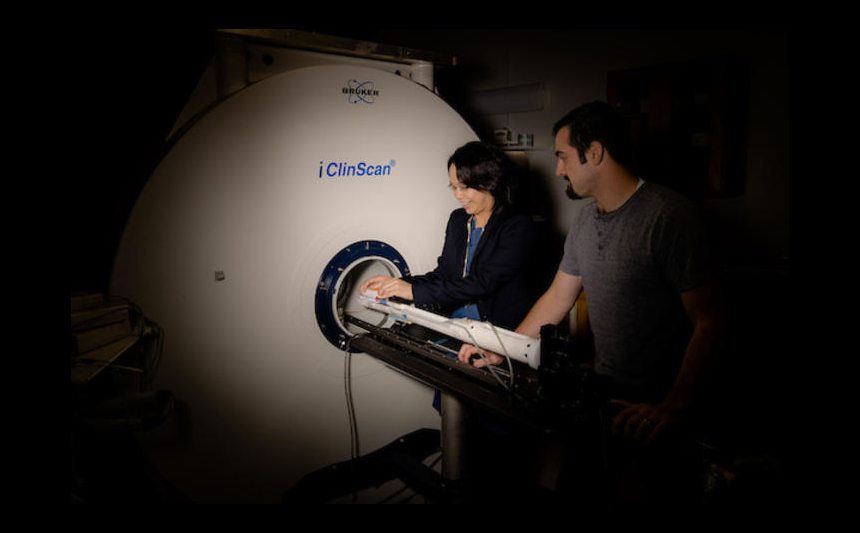 We’ve all experienced a “gut feeling” – when we know deep down inside that something is true. That phenomenon and others aptly describe what scientists have now demonstrated: The gut and the brain are more closely connected than we once thought, and the health of one can affect the other.

Capitalizing on this relatively new scientific concept, Ai-Ling Lin and her colleagues at the UK Sanders-Brown Center on Aging have published two studies that demonstrate the effect of diet on cognitive health in animals.

The first study was published in Scientific Reports and demonstrated that neurovascular function improved in mice who followed a ketogenic diet.

“Neurovascular integrity, including cerebral blood flow and blood-brain barrier function, plays a major role in cognitive ability,” Lin said. “Recent science has suggested that neurovascular integrity might be regulated by the bacteria in the gut, so we set out to see whether the ketogenic diet enhanced brain vascular function and reduced neurodegeneration risk in young healthy mice.”

The study’s researchers considered the ketogenic diet – characterized by high levels of fat and low levels of carbohydrates – a good candidate for the study because it has previously shown positive effects for patients with other neurological disorders, including epilepsy, Parkinson’s disease and autism.

Two groups of nine mice, aged 12-14 weeks, were given either the ketogenic diet or a regular diet. After 16 weeks, the researchers saw that the mice on the ketogenic diet had significant increases in cerebral blood flow, improved balance in the microbiome in the gut, lower blood glucose levels and body weight, and a beneficial increase in the process that clears amyloid-beta from the brain – a hallmark of Alzheimer’s disease.

“While diet modifications, the ketogenic diet in particular, have demonstrated effectiveness in treating certain diseases, we chose to test healthy young mice using diet as a potential preventative measure,” Lin said. “We were delighted to see that we might indeed be able to use diet to mitigate risk for Alzheimer’s disease.”

According to Lin, the beneficial effects seen from the ketogenic diet are potentially due to the inhibition of a nutrient sensor called mTOR (mechanistic target of rapamycin), which has shown to affect lifespan extension and health promotion. In addition to the ketogenic diet, Lin said, mTOR can also be inhibited by simple caloric restriction or the pharmaceutical drug, rapamycin.

The second study was published in Frontiers in Aging Neuroscience and used neuroimaging techniques to explore “in vivo” the effects of rapamycin, the ketogenic diet or simple caloric restriction on the cognitive function of both young and aging mice.

“Our earlier work already demonstrated the positive effect rapamycin and caloric restriction had on neurovascular function,” Lin said. “We speculated that neuroimaging might allow us to see those changes in the living brain.”

What was even more tantalizing was that her data suggested that caloric restriction functioned as a sort of “fountain of youth” for aging rodents, whose neurovascular and metabolic functions were better than those of young mice on an unrestricted diet.

Lin emphasizes that it’s too early to know whether the regimens will confer the same benefit in humans, but because rapamycin and other mTOR inhibitors have already been approved by the FDA and are widely prescribed for other diseases, it’s realistic to think that study in humans could follow relatively quickly.

Linda Van Eldik, PhD, director of the UK Sanders-Brown Center on Aging, said that Lin’s work justifies a transition to similar studies in humans because all of the methods Lin used in animal models can be readily applied to humans.

“Ai-Ling’s lab was one of the first to use neuroimaging to see these changes in a living brain and the potential link to changes in the gut microbiome,” Van Eldik said. “Her work has tremendous implications for future clinical trials of neurological disorders in aging populations.”

Lin and her lab are already doing just that. They are designing a clinical trial to understand the role of the gut microbiome in neurovascular dysfunction, which is a risk factor for Alzheimer’s, and in healthy aging.

“We will use neuroimaging to identify the association between gut microbiome balance and brain vascular function in individuals over 50 years of age, with an ultimate goal to design and test nutritional and pharmacological interventions that will prevent Alzheimer’s disease,” she said.

KNI neurologist searches for cause of ALS at family reunions

Understanding the signs and symptoms of dementia