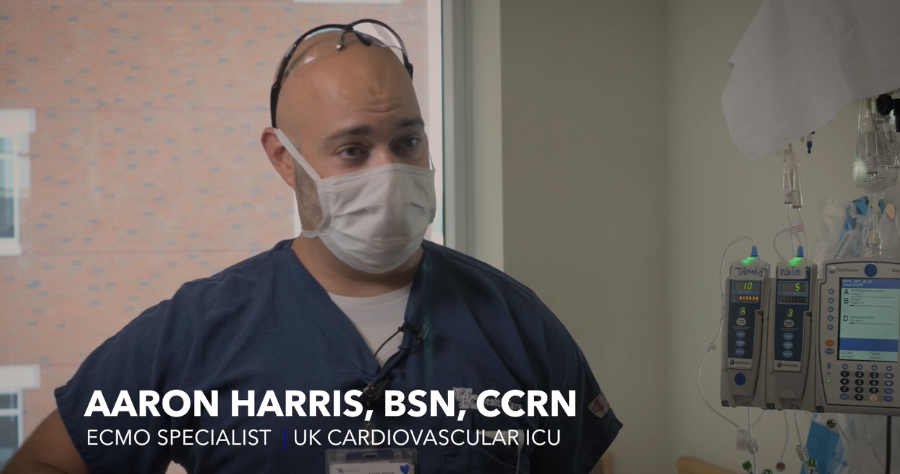 We recently joined hospital staff for a few days to document the reality of treating COVID-19 patients in UK HealthCare clinical settings.

This edited interview is part of our ongoing series, “UK HealthCare: Voices from the Front Lines,” highlighting stories and perspectives from our frontline staff who have been caring for the sickest COVID-19 patients since March 2020.

Aaron Harris has been an ECMO specialist at UK HealthCare for more than eight years.

Can you describe ECMO?

ECMO at some level is kind of like science fiction for people who have no background in it. It's a pump that goes through an external membrane which works as a lung. Depending on where you put your cannulas in, it can either work as support for your lungs or for your heart.

The way that it works with your physiology, it's a game changer. It offers an option for people when there is no other option. So, to me, it's both kind of magic at some points and it's also really scary at points, too. Because at any moment, things can go really wrong.

But I love it. I love taking care of people on ECMO, and I hate that people have to be on it. But if they've got to see us, I want it to be here, because we do a great job.

Prior to COVID, what was a typical patient that you would administer ECMO to?

Before we got really heavily into COVID, the patients that we would take care of could have been a mix of several things. One; people who might have existing lung disease that had gotten to the point where it's so bad that they needed to have a transplant. So, ECMO could serve as a bridge for them to get to transplant.

Can you talk about the increase in COVID patients on ECMO?

There's been a lot. Initially, some of the people that we were taking care of on ECMO during that first wave were older, probably in their 60s or so, 50s and 60s. At the height of it probably last year, we had probably about eight people on ECMO, at the most. And now, it's dramatically different.

The age range of people that are requesting ECMO is now (mostly) people between 20 and 50 years old. And we have a wait list right now for people who are desperately needing ECMO. And whenever we have a circuit come free, we have to call these facilities and then get updates and try to figure out who the best person is to give them that opportunity.

These are people from other hospitals?

Yes. The really great thing about UK is we've got a great network of hospitals that we work with in order to draw in people to support them, because ECMO requires a lot of support in order to be able to pull off that care safely. A lot of the smaller outlying facilities just don't have the infrastructure in place to be able to safely do that. So, we get referrals from all over Kentucky and beyond. A lot of these hospitals are just, at this point, overwhelmed. And they don't have the capacity anymore. So, they're just desperately searching for options for people. And even for us — we're full now. And we're staying full. As soon as one person comes off, another person is going on.

What are the chances a COVID patient who needs ECMO will recover?

Generally speaking, (ECMO) is supposed to be a pretty short-term therapy. But I'd say a lot of our people who we're taking care of with COVID are at least on (ECMO) for somewhere in the four- to six-week range, if not longer. And … once you're on ECMO, the chances that you'll successfully be able to come off of it are basically 50 percent. So, looking at all of the data nationally and internationally, most of what we see is it's about a 50/50 shot at best. If you start having other organ systems that start having problems, the chances of being able to come off ECMO dramatically decrease, unfortunately.

So, on the one hand, it's good. You have a 50/50 chance where, without it, you probably have no chance. But still, it's really hard when half of the people that you take care of are probably going to not make it.

What's it like coming here every day and seeing so many people going through this?

It is really hard. As a health care provider, there's something that you do where you put up a wall and you allow people in only so far. But as a human being, that doesn't always work. And so, you can't help but not enter into some of that suffering that the patients and families are going through.

This wave's been really, really hard because as the numbers are showing, it's people who are a lot younger. It's the people who are a lot less sick at baseline. They're still fairly sick, but who might not have anything else going on besides 9being) overweight, or they just had a bad run of luck. And now, here they are, fighting for their life.

We've had pregnant mothers on ECMO.. We've had young, strong men on it. It doesn't know any boundaries, and COVID doesn't care. And that's been really hard because we've seen some of those people have really bad outcomes.

Pregnant people have lost babies. We've had young people not make it. And that's heartbreaking because you can't not pour some of yourself out when you're doing this. And so, when you are doing everything that you can do and it's still not enough, that's really hard. And we don't even feel it as bad as family members feel it. But it still hurts us, too.

And then the stress of it — when you're coming in and you're working with more ECMO patients than we've ever really taken care of before at this facility and having a waiting list of people who are desperately trying to get in … and sometimes, you just can't help them.

What's the most important thing that you want someone on the outside to understand about what's happening here?

I think one of the most important things that I would want people to know is that we will do our best for you, whether you're vaccinated or whether you're not. I would encourage people to read the evidence that's out there, to not seek out medical advice on social media, and to listen to your providers who are on the front line, who are taking care of people who are suffering and dying with this, and believe the stories that we're telling.

We're not here lying. We do this day in, day out. And so that does give us a certain level of expertise to comment on what's going on. I would encourage people to get vaccinated, because it may help you, it may help people that you don't even know.