Nearly 2,000 people in Kentucky died of stroke in 2010*. It’s the fifth leading cause of death in the Commonwealth. And even those who survive often face a lifetime of disability.

At UK HealthCare, we’re on a mission to provide the highest level of stroke care possible. And to turn those statistics around.

Our Stroke Center has earned Comprehensive Stroke Center status – the highest rating a stroke center can achieve. We’re one of only four centers in Kentucky and only 100 nationwide to earn this designation.

Visit the Comprehensive Stroke Center to learn about our stroke specialists.

What Is a Stroke?

A stroke, or brain attack, happens when a blood vessel carrying oxygen and nutrients to the brain is blocked by a clot (ischemic stroke) or bursts (hemorrhagic stroke). When an artery is blocked, the brain can’t get the blood and oxygen it needs. Brain cells can die from the lack of blood and oxygen.

Ischemic strokes are the most common type. There are three types of blood vessel blockages in the brain or neck that cause ischemic strokes:

If a blood vessel bursts inside your brain, a hemorrhagic stroke can take place. Approximately 20 percent of all strokes are hemorrhagic strokes. Damage occurs either because of the blood that leaks into the brain or because the fluid increases pressure on the brain. This hurts your brain by pressing it against the skull or the brain stem.

A stroke may also occur because a brain aneurysm, or a weak area in the wall of an artery that supplies blood to the brain, ruptures.

Warning Signs of a Stroke

Note the time when any symptoms first appear. This information is important to your health care provider and can affect treatment decisions.

If given within three hours of the first symptom, a clot-buster medication may reduce long-term disability for the most common type of stroke. There are also two other types of stroke treatment available that might help reduce the effects of stroke.

Call 911 immediately if you have any of these symptoms.

Stroke patients at the Kentucky Neuroscience Institute have access not only to the region's top doctors, but also to the most advanced medical technology. UK HealthCare was a pioneer in the region in the use of catheters and other tools for the emergent removal of stroke-causing  blood clots from brain arteries.

Knowing and controlling your risk factors can help you prevent a stroke. Check all factors listed below that apply to you. If you check two or more, please see a doctor to determine what you can do to lower your risk for stroke.

How to Reduce the Risk of Stroke

Nearly 80 percent of strokes are preventable. You can lower your risk of stroke by learning your risk factors and making simple lifestyle changes.

Simple steps to reduce your risk:

The UK Stroke Program screens hundreds of individuals each year. If you are planning a community event and would like to offer a stroke risk screening, please complete the request form.

The UK Comprehensive Stroke Center and Norton Healthcare have joined with area hospitals to help develop the first community-based stroke program in the region. The collaboration is designed to provide the highest quality clinical care and educational programs to hospital staff as well as community members.

The relationship with each hospital allows patients to receive the best possible care during the early moments of a stroke, when diagnosis and administering rapid treatment are most important.

Each hospital has made a strong commitment to providing current and clinically effective stroke care for the community. The UK Stroke Center and Norton Healthcare support these efforts by providing clinical guidance and oversight, making sure that stroke patients receive the right treatment at the right time.

Hospitals in the Stroke Care Network:

For more information please contact Britan Schenk at 859-323-3092 or britan.schenk@uky.edu.

The stroke center at UK Chandler Hospital was the first in the region to be designated as a  Comprehensive Stroke Center. 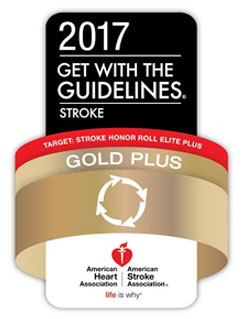 UK HealthCare’s Kentucky Neuroscience Institute (KNI) has received the Get With The Guidelines – Stroke Gold-Plus Quality Achievement Award by the American Heart Association/American Stroke Association for maintaining nationally recognized standards for the treatment of stroke patients.

UK HealthCare is distinguished from other stroke centers for meeting the highest standards of care to receive and treat the most complex stroke cases. We are focused on quality of care for our patients and use several measures to benchmark our performance, including core measures and patient survival data. See our quality measures.