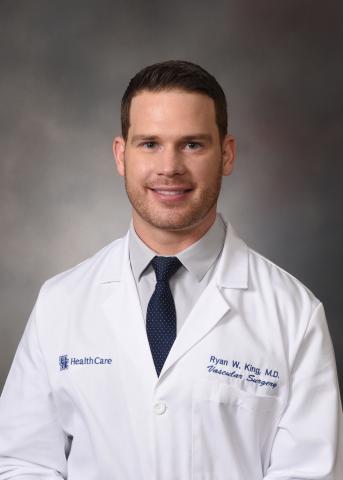 Dr. Ryan W. King was born in Gorham, New Hampshire. He then moved to Florida to compete on the Professional Wakeboard Tour. Injuries he sustained while wakeboarding introduced him to the surgical field, and ultimately inspired him to pursue a career in surgery. He graduated summa cum laude with a degree in biochemistry from Saint Anselm College in Manchester, NH. He then returned to Florida, obtaining his MD from the University of Central Florida College of Medicine. He matched into a competitive integrated-vascular surgery residency program at the Medical University of South Carolina (MUSC) in Charleston, SC. While in residency, he was named recipient of the MUSC Department of Surgery Dabney Yarbrough Research Award for excellence in research. It was the first time that the award was given to a resident in an MUSC integrated program, and the first time it was awarded to a resident who conducted research concurrent to their training. He was also awarded the Division of Vascular Surgery Tahlia Weis Teaching Award for his commitment and contributions to MUSC’s vascular surgery education. He has authored an impressive number of published journal articles early on in his surgical career and has obtained provisional patents on medical devices. He has a special interest in complex aortic aneurysms and dissections, peripheral artery disease, central venous pathologies, and carotid artery disease, among many other vascular conditions. He joined the University of Kentucky Division of Vascular Surgery faculty in the Summer of 2022.