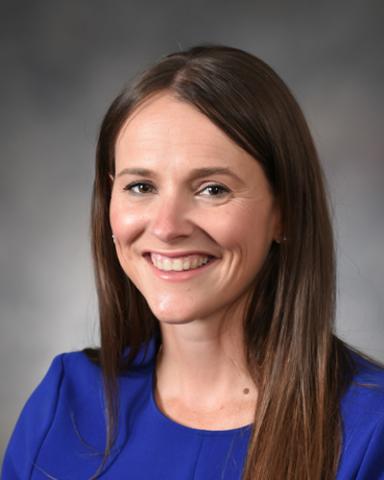 Lacey Buckler earned her BSN, ACNP and DNP from the UK College of Nursing in 2003, 2006 and 2013 respectively. She began her nursing career as a nursing care tech in the cardiac telemetry unit at UK HealthCare and continued on her career path as a student nurse apprentice and registered nurse on the coronary care ICU. In 2005, she became the patient care facilitator for the Division of Cardiology, and in 2012 became the director of Cardiovascular Nursing Services. She has been in her current role as the UK HealthCare Assistant Chief Nurse Executive for Advanced Practice and Strategic Outreach since April 2015. Buckler has also held an adjunct faculty position at the UK College of Nursing since 2010.

Buckler has cowritten numerous articles for publication in journals such as The Journal of Nursing Administration, Nursing Clinics of North America and Nursing Critical Care. She has also coauthored several textbook chapters in Nursing Made Incredibly Easy! and High Acuity Nursing. Buckler is a member of the American Academy of Nurse Practitioners, the American Association of Critical Care Nurses, the American College of Cardiology, the Kentucky Coalition of Nurse Practitioners and Nurse Midwives, and the Sigma Theta Tau International Honor Society of Nursing, Delta Psi Chapter. In 2013, she was recognized as a UK College of Nursing Outstanding Alumni as the recipient of the First Decade Award which is given to those who hold an undergraduate or graduate degree from the UK College of Nursing, who are currently engaged in the profession of nursing, who have been in practice for 10 years or less prior to the annual meeting, and who have laid the foundation for an exemplary career in nursing.

I chose nursing because I have a passion for taking care of others and seeing the happiness on a patient's face when they get to leave. Providing great care is very rewarding. The most fulfilling part of my job is seeing patients get better.

Lacey Buckler, who earned three degrees from the UK College of Nursing, currently serves as an…